At the 25th Anniversary of the ground-breaking International Education and Resource Network [ I*EARN], I wanted to send a warm and heart-felt congratulations to all involved at the 20th International Conference in iEARN-Qatar/ROTA (Reach Out To Asia) in Doha, Qatar.

Although I have not been teaching for almost 20 years, I wanted to pass on my congratulations and best wishes to all those involved in Qatar this year.

I have little to share of the wonderful work that students completed in the early years, because my family lost all our belongings [and archives] in what was called the “Black Saturday Bush-fires” in 2009, here in Victoria, Australia.

However, with the assistance and kind permission of the Australian Broadcasting Corporation [ABC] I have been able to share a mini-documentary “Internet Kids” about I*EARN Australia, and the Broadford students. This was broadcast nationally in 1995. I hope you enjoy this as a small snapshot of the history and early stages of I*EARN. I also have some historical links at the bottom of the page.

Students from Broadford Secondary College were some of the first students in the world to be involved in Global telecommunications projects. In the late 1980’s and early 1990’s we built a small but strong network of schools using both traditional and very new [telecommunications] methods to connect our classrooms in what we then called in 1988, “The Global Classroom”. This was the title of the Year 8 Geography class!!

The Australian Broadcasting Corporation [ABC] produced an episode of their mini-documentary series “Hot-Chips” on the work of Broadford Secondary College.

In 1988 and 1989 [pre-world-wide-web] Broadford students began a project called the  ‘First Peoples” project. They began corresponding online with Jim Lovejoy and the students from G.A.T.E.S [Greater Alternatives to Education School] in Tacoma Washington, USA. Tranby Aboriginal College in New South Wales and via mail and phone with students representing indigenous Ainu communities in Japan. Netcomm Australia even supplied VERY high-tech modems for us. In 1991 we conducted a Five country Student teleconference (Year 8 Geography) for the Year of Indigenous Peoples and we established this on the I*EARN Conference systems as I*EARN First People’s project.

That phone call cost over $250 dollars and lasted only about 60 minutes. That was a LOT of money… Today? Skype?

In 1992, 22 Students from Broadford Secondary College visited Canada and the USA to meet with G.A.T.E.S. School students. This was the first-ever international exchange fro Broadford Students.

The Broadford link with Japan still runs today, with students from Katsuta High School and Broadford Secondary College participating in exchange programmes and home-stays each year.

These were 2400 K dial-up modems. or those that know what a modem is, this will seem very funny now!

We worked with a small network of local schools at first, including Broadford Primary School, Puckapunyal Primary School [who created one of the first “Share-a-friend/Teddy-Bear and Global Art Projects”] and Mansfield Secondary College who led the way with online environmental and water-quality projects. In the early years, we communicated using the NEXUS network from the Education Department of South Australia at Angle Park Computing Centre.

In 1990-91 we even managed to be the first school in the Southern Hemisphere to use a Video-phone. Yes, this may have “perhaps” violated one-or-two telecommunications laws at the time, but we figured if we managed to get senior Education officials and Ministers in the picture, then we might not get in to too much trouble!![grin]

This little group was later recognised in a speech in the Australian Federal Parliament in 1993.

We convinced the Victorian Government [with excellent support from Bruce Rigby] to support our work and partner with our I*EARN Australia Centre and for two years they co-funded the Victorian Global Classroom Project, designed to support the professional development of teachers. 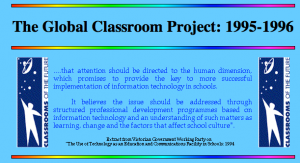 As full-time teachers, we also managed to personally provide training in 100 Victorian schools in the first year and a further 300 in the second year, all based on the I*EARN model.

Even in the earliest stages of what was to become the “internet” – [we were still working on systems that had to “cross” from one network to another], it became obvious to me that connecting with the early pioneers and trailblazers such as  Peter and Ed was something that would benefit all educators. I think after 25 years, my intuition is well supported.

I was lucky enough to participate in the early planning stages of the I*EARN International network at Beaver-farm, New York, where I was privileged to meet Peter Copen and be exposed to such a grand vision for education and new technologies. Here I also met the human dynamo and perhaps the most committed educator I have ever-known, Ed Gragert.  Many of the team that would become the first International management team where at this meeting in New York.

I am very proud to be able to call Peter and Ed my friends.

In 1994 I was again privileged to attend the very first IEARN Conference in Puerta Madryn, Argentina, hosted by my good-friend Daniel Reyes. I still miss Daniel and his vision.  Here I met [among many] two amazing educators, Rosy Aguila and Adrianna Vilella.

Rosy and Adrianna, your work inspired us all. Thank-you.

The work in Argentina saw the creation of the I*EARN Constitution. My original, signed copy did not survive the fires, but believe it or not, I have been able to recover  a copy of that document from a digital archive stored offsite!!!

It’s worth sharing those names, just so I can say thank-you publicly.

Twenty five years later, and look what has been built!

The work and inspiration our small team [myself,Cathy Coppinger, Andrew Hocking, John Steele and Roland Gardiner]  experienced in Argentina in 1994 drove us to expand the work we began in 1989 and we set out to make sure the inspiration and achievements of the work in Argentina were not lost. We committed to hosting the SECOND I*EARN International Conference in Melbourne, Australia in 1995.

With the support of Trish Bulluss, we hosted over 400 educators from 22 countries, expanding our little network of schools to a National Network that has continued to grow and prosper.

As a follow-up to the Melbourne conference, students and teachers from over 35 schools attended the first PLANET I*EARN STUDENT FORUM which was held at the University of Melbourne on December 15th 1995.

Though looking from afar, the work and achievements that have been created were, perhaps, dreamed of, but thought impossible in 1996.

The work of the IEARN Australia team in the last twenty years should be roundly congratulated.

I have very fond memories of my years in I*EARN. I was honoured to chair the I*EARN International Management Team for three years and was amazed at the power and depth of educators working together, across borders.

I look forward to the next 25 years of I*EARN.

Congratulations to all involved in Dohar, Qatar.

* Note: The links I am providing here are to websites that are now archived. They used technologies dated as of 1996. Some of these sites are within “frames” of other sites and not designed to be easily or logically navigated, however they are the original documents and sites and I consider these to be of some historical interest/value and worth sharing.