Those interested in evidence-based-planning or frankly, any form of rationale decision-making, will find much to interest them in the work of Nate Silver.

With Obama being declared the winner by the networks, it looks possible that Nate Silver’s map will be perfect, all 50 states called correctly. Not certain yet, but really, an epic followup to 2008.

It really is worth the effort to look at his work, both in 2008 and again this year.  His recent interview on NPR and his disdain for cliche-driven pundits not willing to make “a call” when evidence suggested a high probability of an Obama win, makes for a sobering commentary on what currently passes for “informed debate”.  Regardless of the politics of the winner, the process of analysis and informed reporting is a modern jewel.

Does this mean the earth really is round? 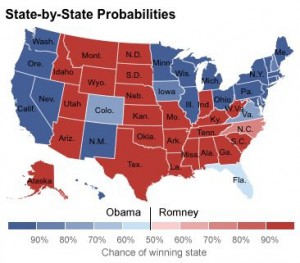