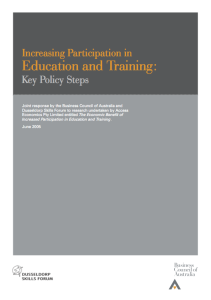 Report from BCA and DSF published. Anyone interested in the question of youth participation in education and training is sure to be interested in this latest report from Access Economics, jointly commissioned by the Business Council of Australia (BCA) and the Dusseldorp Skills Forum (DSF).

The Dusseldorp Skills Forum commissioned Access Economics to test the merits of the economic case for increased policy emphasis on youth participation specifically in relation to the Government’s own work on inter-generational issues.

Their findings are documented in The Economic Benefit of Increased Participation in Education and Training.

While the study is based on detailed economic modeling, the report itself is very accessible. Its clear language and explanations open the door to some very important findings.

By way of example, the research found that the effect of increasing school and training retention rates among 15-24 year-olds from the current 80 per cent mark to 90 per cent would:

This report advances the analysis and modeling of the information used in the Treasury Working Paper: A Note on Educational Attainment and Labour Force Participation in Australia and The Intergenerational Report 2002-03.

Accompanying the Access report is a brief policy paper from the BCA and the Forum putting several suggestions forward in the light of the report’s findings.

Bracks gets an ‘F’ for his school funding folly

Students Perceptions of the World of Work.